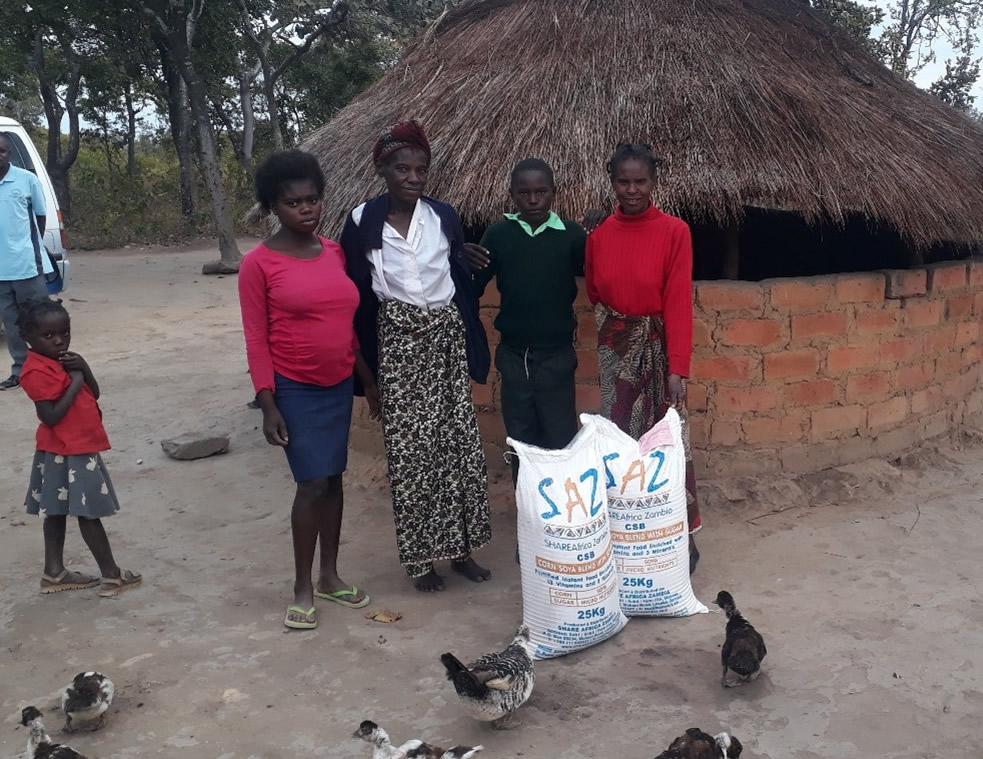 Oscar Chibuye is one of the children on our Orphan Programme. His father has died and he lives with his mother and other members of the family in the Luombwa area of Serenje. Luombwa is about 400km north east of Lusaka and is a remote place where life is very difficult. His mother does a little farming but the soil is very poor and unproductive. Recently there was an outbreak of scabies in the area and the young ones were mainly the most affected, including Oscar.

The area has no safe drinking water as the inhabitants get their water from shallow wells and stagnant pools of collected water during the rainy season.  For the girl child, it is not easy to get sanitary pads and hygiene is usually compromised.

Oscar’s situation is typical of many of the rural children that we support. The regular food distribution and the help with education is much appreciated. Many more are crying out for help and we do what we can. New sponsors are always welcome.

Share Africa Zambia (SAZ) exhibited at the provincial agriculture show held on 8th to 9th July 2022, The show had the theme “Innovation through Technology” ( Technology Transforms Business) and SAZ exhibited under the category of “best out-grower” company in eastern province.

SAZ attracted good interest and won the first prize of best out-grower in eastern province.This reflected the work of SAZ introducing mechanization and automation technology to small holder farmers in typical rural areas. The permanent secretary visited and appreciated the role played by SAZ in helping to increase production levels of rural smallholder farmers as well as for creating jobs to women and youths, for instance, during sorting and grading activities. 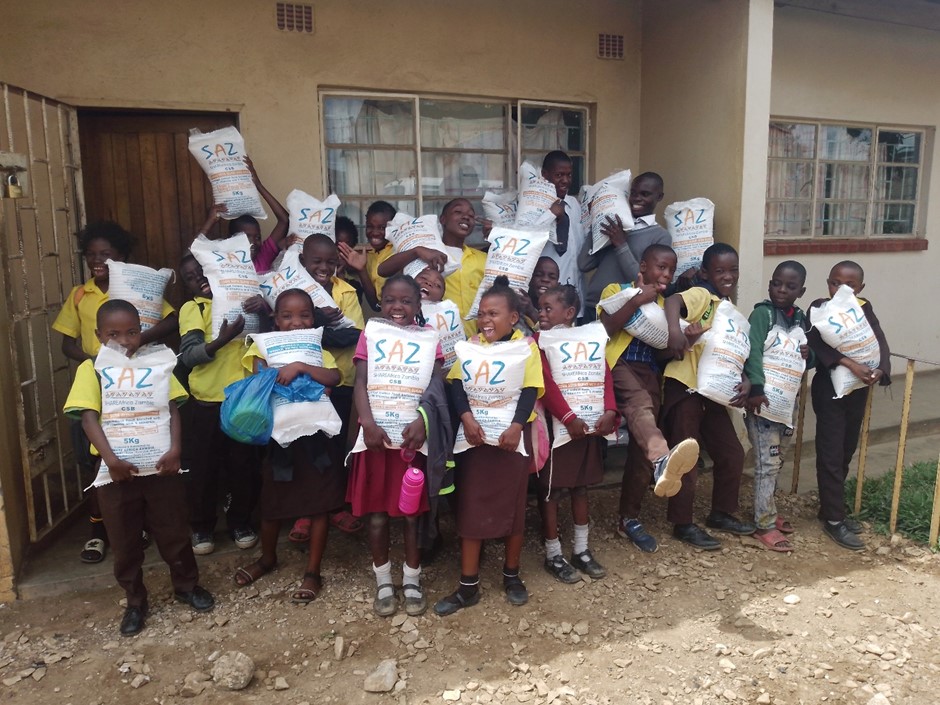 The Emmanuel Children’s Home is regularly supported by our Church Feeding Programme. The home which is run by the New Kanyama Assembly, cares for 240 orphaned and vulnerable children. 12 of these children are housed at the facility while the rest come from their homes for school. These children come to school hungry and usually the corn soya blend is the only food they eat, so the school feeding program has had massive impact on their academic performance and health. The CSB from ShareAfrica is the main meal for their lunch break.

Providing meals for the children who live at the facility is a great challenge, the resources are so limited, and the corn soya blend is often the only food available. The Elders from Kanyama Assembly are always sending thank you messages on behalf of the children. They say the help they receive goes a long way in feeding the orphaned and vulnerable children.

In 1997 two brothers started a small assembly in Magoma, in Eastern Province, following an encouraging response to Gospel outreach in the surrounding villages. The assembly started with 12 people gathering under a large tree, and after 2 years numbers had grown to 40.  Magoma today has about 120 in fellowship with about 250 who attend the Gospel services. The mud brick structure where they meet is too small with many having to sit outside, so in 2019 they embarked on an ambitious project to construct a new hall measuring 12 x 28 metres.

Raising money to construct such a large building in a village where most are relatively poor was well nigh impossible so they decided to approach the chief to acquire a field that could be used as an assembly field where all earnings would go towards the ‘building fund’. In 2019/20 SAZ listed the 10 acre field as a seed growing field and provided seed and other support. The farmers clubbed together to share oxen and ploughs and in the first year they raised enough money to start making bricks and buying cement. The next year, 2021, they used the income to start constructing the hall as well as providing financial support for their orphans and widows.

After months of hard labour, the building has now reached roof level, but to construct a roof for such a large building will cost more they can raise in a year from the assembly farm. The elders asked if we could help out financially.  However, on inspecting the building we discovered it did not have adequate foundations and as a result major cracks were appearing on the walls. It was obvious the structure was incapable of holding a large roof, but knocking it down would be a great  disappointment as well as an immense loss of time and money. The option therefore was to seek advice on how the structure could be saved.

An architect has recommended that a steel ring-beam be built around the building at roof level along with steel pillars to hold the roof. This is the only way the structure could support a roof. The estimated cost for the ring-beam and the roof is over £21,000. Although the Magoma farmers are expecting a good harvest this year, the money will not be enough to meet these costs, and these don’t include the floor, windows, plastering and so on. However, if we can raise the money for the ring-beam and the roof, they should then be able to meet in the new building. Other work can be done once they raise funds from future harvests.

We look to the Lord for His provision. 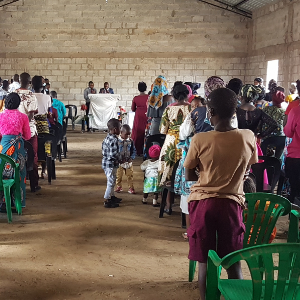 When the brethren from SAZ visited in October 2021 the outer shell was completed but there were no funds to fit a roof and windows and doors etc. The need was brought to the attention of ShareAfrica in the UK and funds were sent to complete the building of the hall and to install a water borehole.

The borehole has been installed and the building completed. The borehole will not only benefit the Assembly but will be a great help to the community, saving them a 1 km round trip to collect water. Further help will be given through SA to build a caretaker’s house to keep the site secure.

Now that Covid-19 restrictions have been lifted, the Assembly plan to recommence outreach work in a densely populated compound nearby called Kasala. Brethren from the Chipata Central Assembly will help in this outreach work. The Assembly at Petauke are very grateful to the Lord for His provision of the new hall and trust that, with His help, they will be able to be a real witness in the town 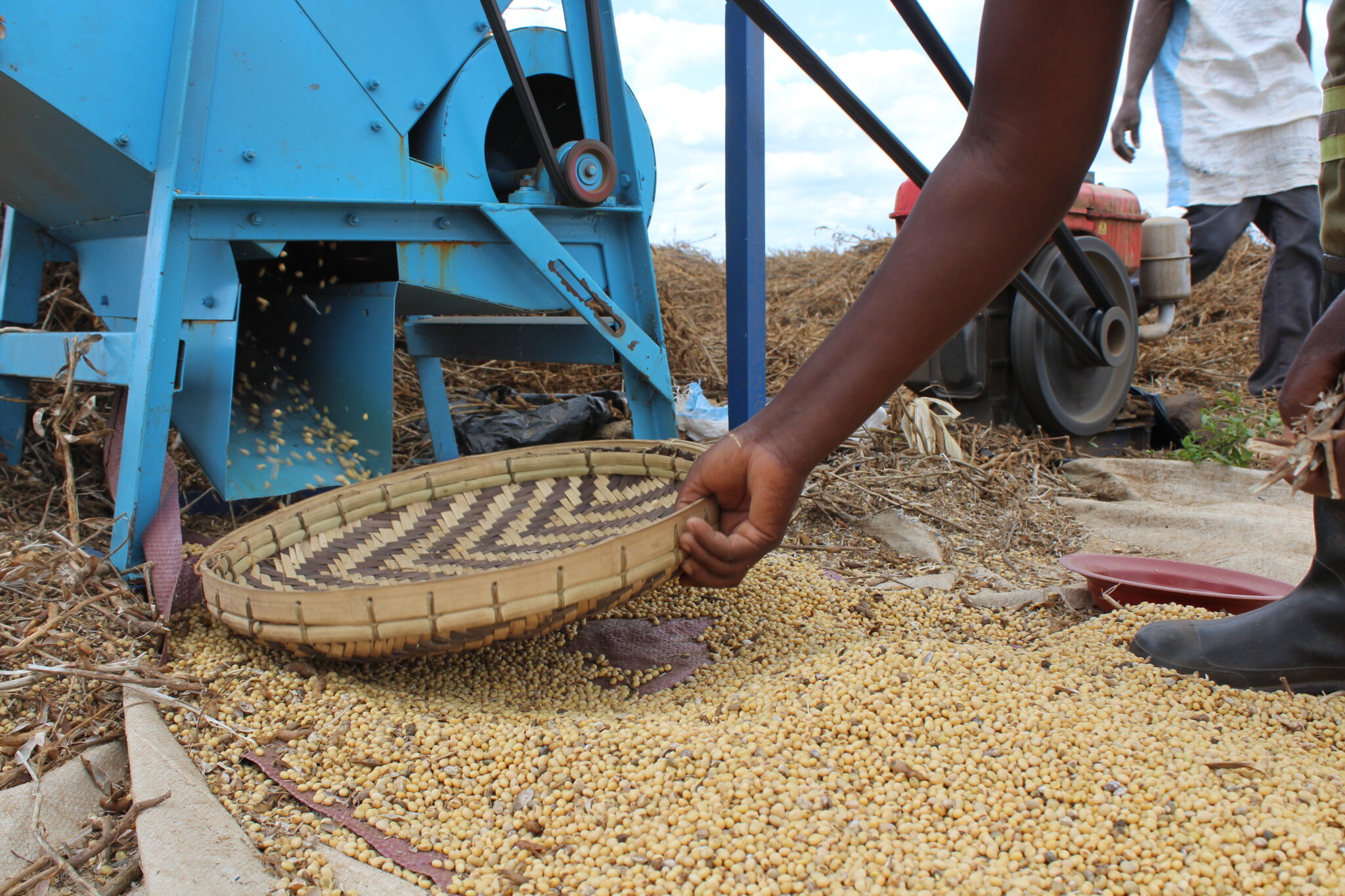 The harvest is well underway. A number of harvesters have been donated which will speed up the work and ensure that more of the grain is collected. SAZ collects the grain from the small farmers we support. The farmers are paid directly and the produce is collected in our store sheds before being sold on in bigger consignments. 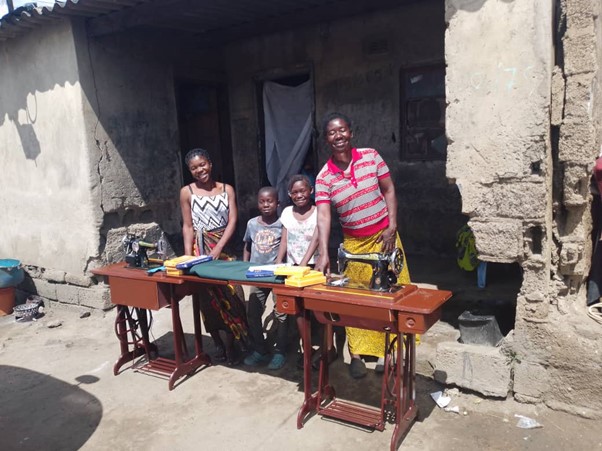 Some generous donors have purchased two sewing machines for the mums of two of the children they are sponsoring. The ladies are delighted. They haven’t used a machine before but they have asked a relative to give them some help and plan to make clothes for their families and to sell.

This will give these ladies a way to earn money to help support their families. They live in a poor area and are struggling just to make ends meet. It is so good to be able to help them to help themselves and provide ongoing income for them.